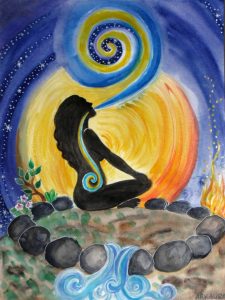 The moment we get born we start breathing and we keep on doing this until we die.

Breathwork can greatly help people with releasing stored trauma from different parts of the brain, including our emotional and reptilian brain.

In addition, breathwork helps relief stress and can add to more and stronger feelings of inner peace.

There are many different breathing techniques, we will go into 3 methods here so people can get some personal experience with several  techniques so that they can explore for themselves what they resonate with.

We start with Wim Hof his breathing method. He demonstrates how simple breathwork can be but how profoundly it can affect us. In this video he explains his process in detail. You can find a Guided Wim Hof Breathing Method video here.

The second method that demonstrates breathwork is that of Tony Robbins. He has made a routine what he calls – Priming your Day – which includes a breathing technique. In addition to the breathwork Tony Robbins adds some other interesting techniques as well which shows that you can combine breathwork easily and successfully with other modalities also. In this video Tony talks you through a whole session.

The fourth is a Quantum Light Breath Meditation guided by Jeru Kabbal.

How to get more from the Quantum Light Breath:

First, expect deep and powerful changes to happen to you. The Quantum Light Breath will clean out impurities and toxins from all the various aspects of your being, including physical, mental, emotional and spiritual. Please bear in mind that the Quantum Light Breath is basically a meditation or inner experience. It was developed as a technique to cut through the mind without dealing directly with it.

In practicing the Quantum Light Breath it is essential to open to the rather radical idea that “Only NOW is.” NOW is all there is. The so-called past doesn’t exit. It is gone forever. The Future never comes. Only this moment is real. Memories are fantasies. And fantasies in themselves are harmless. However, if, like the child sitting in front of the television we choose to believe in them, they will have the same effect on us as if they were real. But, even in a case like this, it is not the memories/fantasies that are causing the trouble but rather the mind’s tendency to believe in them.

When you stop believing that you’re being chased by an imaginary tiger, you will automatically stop running. So it’s not the tiger that is the problem. The problem is a mind that believes that this fantasy tiger is real and therefore wont’ let us stop running. The Quantum Light Breath is based on the realization that the tiger is not real. And this is what must be practiced in daily life. Learn to separate genuine problems (extremely rare) from imaginary ones (a constant flow).

The purpose of the Quantum Light Breath is to help you learn and practice to do just that: see the artificiality of the mind and gradually become its master instead of being its slave.

The approach we are taking with the QLB is that the content of the mind is made up of memories which are basically harmless, but which need to be released. If not released, they will continue to affect us at the subconscious level.

Before a Quantum Light Breath Session:

A warm-up is highly recommended. It helps you to relax and get rid of any kind of nervousness that you may have. This can be in the form of dancing or shaking. Shake the hands as vigorously as possible, keep the whole body loose so that it also stars to shake and breathe as deeply and fully as possible.

During a Quantum Light Breath Session

The energy created by the breathing will bring up this old material in the form of thoughts, emotions, thought-forms or physical sensations. When this happens these emissions are to be released by allowing them to be there. Take no notice. Don’t resist or fight with whatever comes up. Just allow. By allowing we give the message to the subconscious that the material is unimportant and the subconscious will therefore let go of it.

DO keep your awareness focused on the NOW of your breath. Always stay with the breath. DO allow the emotions to arise but DON’T go into them as you’ve often been advised. Some people experience unusual physical sensations in the first few sessions. This can feel like a numbness or a stiffness. Or a tingling. Or a tightening. This is usually because the energy in that particular are is not moving freely. After a few sessions these sensations seldom appear. This usually means that whatever was blocking the energy has been released

AFTER A Quantum Light Breath SESSION

Most people will continue processing after the session is over, sometimes for several days. So be aware of this, especially the following day. You may find your dreams strongly influenced, in turn influencing how you feel during the day. Be especially watchful for “negative” emotions since these are the kind that are repressed. As this old material is activated, you may feel that the emotions you are experiencing are coming from present situations.

It is essential to recognize that these emotions are actually stored memories of old, dead emotions ready to be released. If you believe that these memories are real and consequently act on them, you will give them importance and they will not be released or resolved. However, if you allow them to be there but focus your awareness on the reality of NOW, they will quickly disappear.

The fifth modality of breathwork we will explore here is called – Holotropic Breathing – and was founded by Stanislav Grof. This method goes a bit deeper then the previous ones. A full holotropic breathwork session can last up to three hours and can bring full on psychedelic experiences with it.

Read up a bit on holotropic breathwork before you start one of these longer sessions. If you feel that you know what you are getting into and are comfortable with experiencing the proces then this video can be used to do a – Do It Yourself Holotropic Breath Work – session at home.

Trying these out should give you a good impression of what breathwork can do for a person. Also look around a bit further as well if you like. There are many methods that use breathwork and it can be worth exploring other methods as well. See if you can find a method or methods that resonate and work well for you and breathe yourself towards more inner peace!